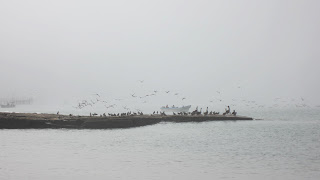 Nothing wakes me faster than the sound of no sound. It is the sound of no air conditioning, a silence that screams "get out of bed and turn the AC off before a power surge hits." Which is what I do. Then I do a systems check around the trailer - modem, direct tv receiver, laptop are all on. I switch on the fan. Nope. I look out at the ceiling fan on the porch - it's running at barely-turning speed. What we have here is a brown-out. It is only June 5th and a bad omen for what the summer will bring. I am relieved when I go outside and can barely see across the park because the air is so dense which means the brown-out occurred for a reason and not just because it felt like it.

Seems like a good time to go for a walk.

Areas of the beach are littered with clusters of Porpita porpitas known as blue button jellyfish (although not really jellyfish). I've never seen them here before. Oh, maybe one or two but nothing like this. Some of the Porpita porpitas are the size of centavos, smaller than a dime. This one was about the size of a nickel. The color is stunning, a dark cobalt blue. 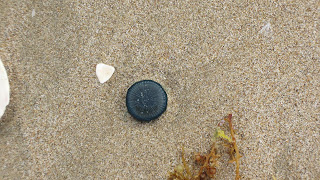 Although the sting is not lethal - just mildly irritating - I resisted the urge to pick one up. 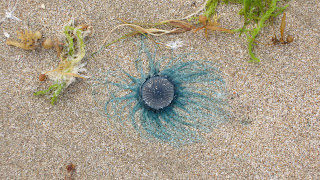 Biologists used to believe that Porpita porpitas were related to Portuguese Man of Wars but they're not. And, I've just learned, Portuguese Man o' Wars (or little blue fucks as I call them but maybe I'll stick with their other name - blue bottle) are not really jellyfish either but a siphonophore, a colonial organism, which is why biologists believed they were related to the blue buttons. Anyhow, I'd seen very few of these little blue...I mean blue bottles the past two summers but they're starting to show up, still in small numbers. 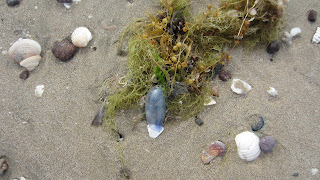 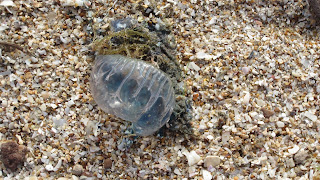 This one looks as though it's about to pop. And that's what the kids here do - stomp them and pop them, kind of like bubble wrap. It looks like it's filled with crystals, doesn't it? 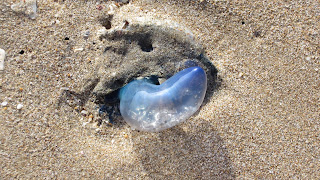 Keeping with the blue theme, this is called a violet snail and it feeds upon Porpita porpitas and Portuguese Man o' Wars. Something else I'd not seen here before. (Check out this gorgeous website. My little point-and-shoot didn't do these shells justice.) 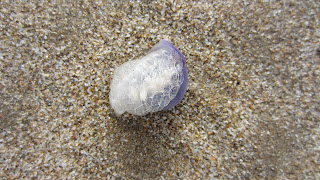 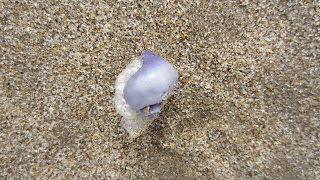 Flocks and flocks of cormorants are heading to the estuary. 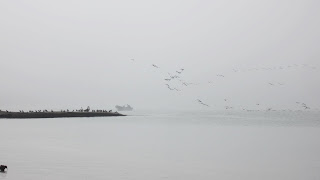 Sadly, this one can only watch from the beach. 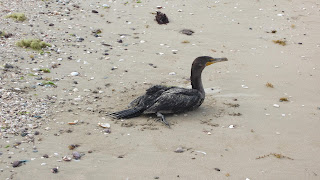 I've been Airstreaming in the Sonoran Desert since 2005, first in southern Arizona and now in Bahia Kino in Mexico. Finally, after four years in Mexico, I came to the realization that I'm an expat.